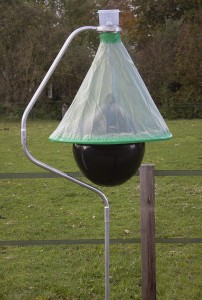 The H-Trap taps into a horsefly’s need for blood by mimicking the look of a large animal…to the horsefly at least! The trap uses a large, black, inflatable ball to do this. The ball absorbs heat, which it then emits and, to an insect attracted by temperature and heat rather than ultraviolet light, this looks like a very attractive ‘animal’ to land on. When the horsefly has landed on the ball, it becomes apparent that it’s unable to bite it and feed on its blood. As the horsefly tries to make a retreat by flying upwards and away, the cone shaped cover funnels the fly into a centrally placed container or collection bin, which prevents the fly from escaping.

“The H-Trap is designed for outside use throughout the season, which typically covers from May to October,” says David Loughlin, Managing Director at Sentomol. “Anyone who’s encountered a horsefly bite knows how painful their stings are, and how they can swell and cause prolonged pain too. With the H-Trap, the number of horseflies is significantly reduced, in fact, independent trials have shown a reduction of over 90% in horsefly numbers in areas continually protected by H-Traps. For horse owners, this is can make a huge difference and, as the trap is completely freestanding and field proof, it’s a great way to help manage a horsefly issue this summer and beyond.”

One H-Trap should be used for every five horses, positioned in or next to the paddock or close to where horses congregate. A single H-Trap has a RRP of £180, which includes VAT and delivery (to mainland UK addresses). Discounts are given for those buying two or more. To find out more about the H-Trap, see www.horseflytrap.co.uk or call 01600 713396.

I have used the H-Trap for a season now and wouldn’t be without them. We put one by the fields and one by the swimming pool where we kept being bitten by the horseflies ourselves. Once the H-Traps were in place we were left in peace. We saw a massive difference in the numbers of horseflies around and caught vast numbers in the trap itself. Having tried many methods I have never been so impressed as I was by these. A definite must have where horses are involved. We could do with a mini one to take with us to put outside the lorry at events now!!

If you'd like to submit a review or suggest a product for review, click here to drop us an email.