Kat Brown, a lady of many talents…freelance journalist by day, Riding Clubber by night & President of the Jilly Cooper Book Club…reflects on her recent adventures on the hunting field! 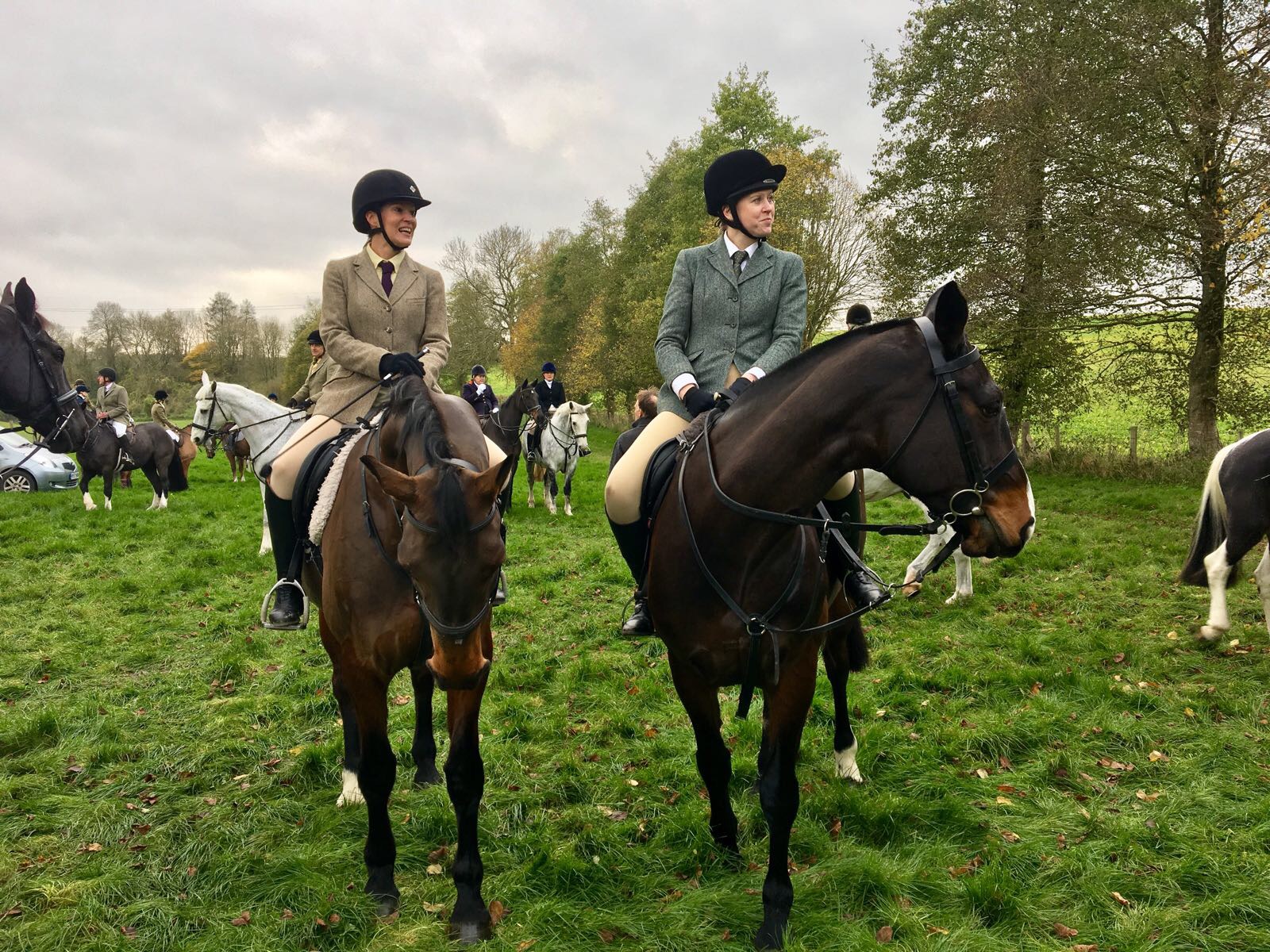 It’s been a cold, cooooold few weeks in Urban Equestrian land (and pretty much everywhere else in Britain judging by my Instagram feed) but I was lucky to get in a couple of wonderful days hunting before it got too perishing to deal with. You see, most of my winter stuff is in storage while the house I moved into last year is being what I thought was decorated, but turns out to be “pretty bloody heavily renovated” (thank you very much, unending anaglypta and dodgy walls.)

As I am far too mean to nip to the shops and buy replacements, plus am filled with the fear of the newly freelance writer, I was fortunate that my days with the Hursley Hambledon and the Fitzwilliam were pretty clement as November goes, and that my dear friend the Fitz Rep lent me a pretty snazzy riding mac for going out with the latter which kept the Northamptonshire winds at bay!

The Hursley Hambledon meet was a joy for many reasons: it was The Solicitor’s first day out hunting *ever*, the meet was a stone’s throw from my parents’ house which gave me Hovis advert-level twinges of nostalgia, and most crucially The Solicitor drove us there in her car which gave me a break from juggling trains and tubes. It was only to be a short day, but given how full-on the HHH Newcomers Meet had been I was still hopeful for some merriment along the way, especially as we were out with Laura from Plantation Hirelings, who is an extremely Good Egg. 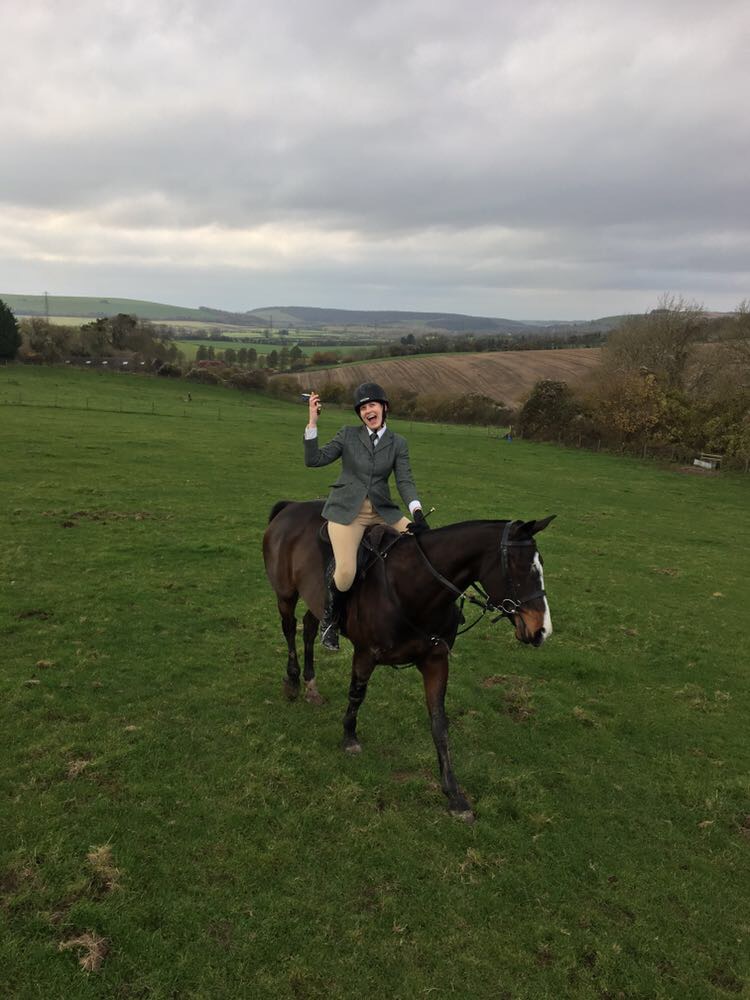 And crikey: merriment abounded. Huge long gallops coupled with the most beautiful views along the South Downs, the sun breaking through with those great jagged joys of winter sunlight that make the countryside feel almost impossibly golden.

It was a lovely day, but my wretched nerves kept bubbling up to spoil things. This usually manifests itself in initially panicking about getting my stirrups the right length, which meant that instead of chatting to my dad who’d cycled along to the meet and generally taking in the loveliness of essentially getting to ride in my parents’ backyard, I was thinking dark thoughts about my stirrups being too long, too short, made of small Siberian hammers etc etc. Eventually, it got to the point where I was imagining falling off and landing on my hipflask and breaking my entire body to smithereens, so I gave my dad ownership of my hipflask and went off alone.

“You did WHAT?” was the shriek from assembled company later when, us all very much running on empty, I dolefully revealed I’d left behind a full whack of my friend Flora’s legendary sloe gin. I wished for a slug or two even more when the day’s lone jump was revealed. Having not quite heard the Master over the wind, the Solicitor and I duly went off to have a crack at what turned out to be an almost hilariously overgrown rail. She popped over it in perfect style, and Vegas and I headed off to have a go. As we got closer I suddenly thought “Oh blimey,” which went into Vegas who decided against it. We had another go, with even less successful results, and once I’d picked myself up off poor Vegas’s neck, another refused rider and I decided to ride around and join the field the long way. After fifteen minutes of clutching Vegas’s neck again in the forlorn attempt of avoiding what felt like Sleeping Beauty’s thicket, we found them in a field facing an almost slope. 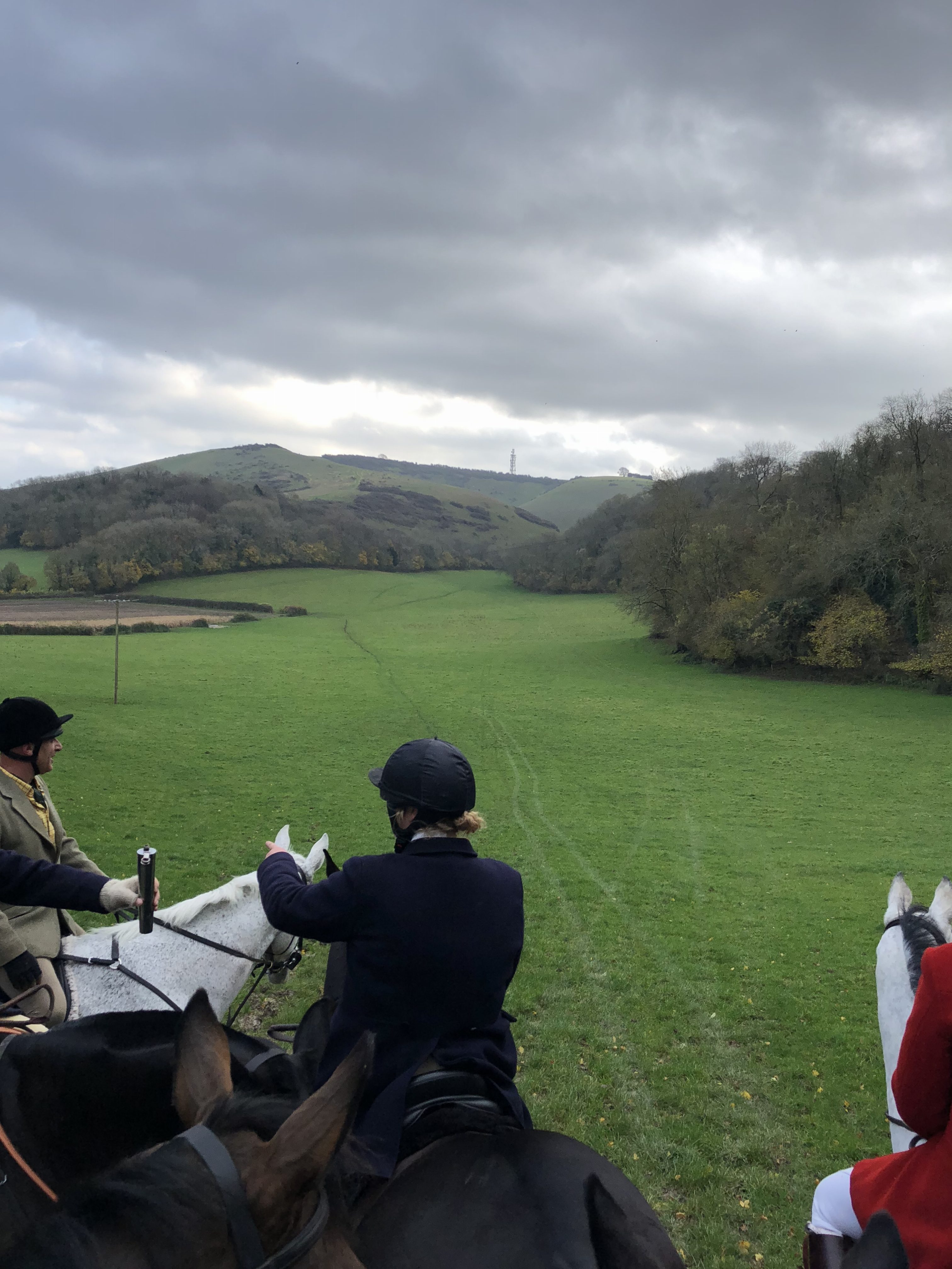 “Kat, what’s happened to your silk?”

It had vanished, presumably currently adorning the thicket. Terrific!

The fact I looked like a Twitter egg in tweed aside, I had a blast over the next few fields, and we weaved back through the country to the meet where I had a crack at closing gates (difficult, despite incredibly long arms. I must acquire a whip.) and was then reunited with my errant silk by an amateur whipper-in who’d come across it dangling from a tree. Hurrah!

The best thing about the day obviously was seeing The Solicitor beaming like a lighthouse and planning her next outing. Bug has bitten.

The next night I had an invitation from Riding Club London to attend their hunting evening with Martha Sitwell, the Countryside Alliance’s Head of Hunting Polly Portwin, Master at the Royal Artillery WO1 Jerry Faulkner MFH, and Harry Beeby, the Huntsman of the Surrey Union – basically the Celebrity Mastermind of British hunting. There were lots of other hunts repped in the crowd, and a wonderful evening was had. Martha Sitwell, who has just launched a hunt clothing line with Harry Hall, brought the house down with her guide to hunting etiquette, and I was sufficiently inspired by the whole evening to have a go at the horn blowing competition (very much NOT hunt blowing competition as I later and rather X-ratedly confused it). My efforts were very much in the “sad trombone” school of things, and I managed to summon about half a cocker spaniel from Fulham rather than command a pack of hounds, but I’m delighted to say that the field of entrants was sufficiently small that I managed to come second and thus away with a copy of Bailys Hunting Companion. Harry politely banished all memory of our squawks with the most ravishing “Gone Home” that had everyone temporarily silenced before falling on the evening’s special cocktail once more, a Chase vodka number aptly named Chase Me Charlie.

The next Wednesday it was off to Northamptonshire and the Fitzwilliam (and a return to my bus, Tube and train combination) before getting a fantastic lift from the Fitz Rep, as well as a mac to borrow to keep off the forecast rain. I ignored Martha Sitwell’s dire warnings about wearing anything new on the hunting field, and was sporting my new thermal stock shirt, the personalised stock I’d won from the Countyside Alliance newcomers competition, and gritted teeth. We had coffee and some chocolate at the hireling yard before clambering up into the lorry to head to the meet where, almost inevitably, I discovered that I’d brought two left-hand gloves. 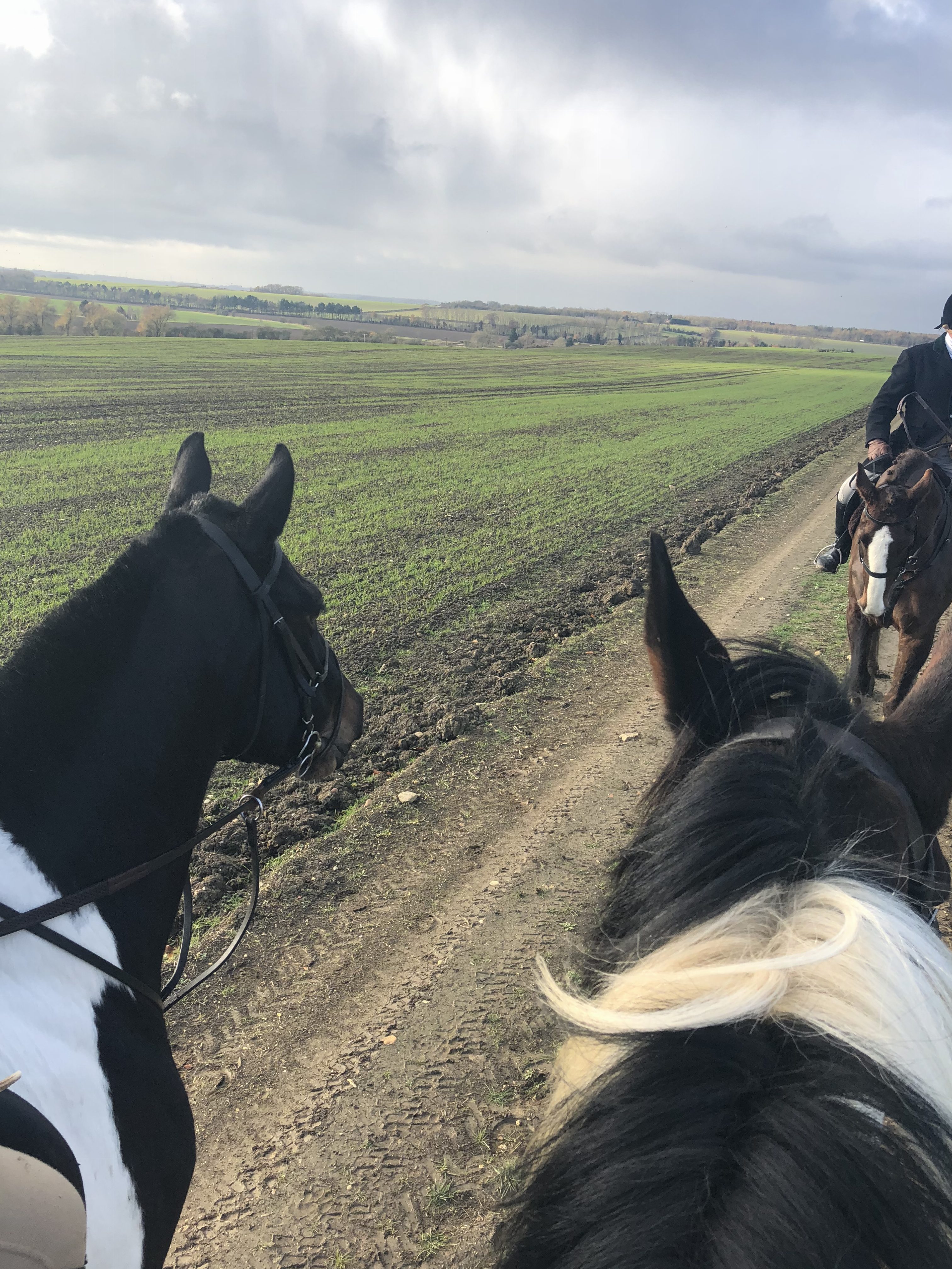 Barbra was feeling her best self, and let me know it by going like the clappers and overtaking most of the field (although not, thankfully, any part of it that would have had me sent home.) After a buck or two I rather weedily let down my stirrups. I’d borrowed Flora’s saddleflask this time, so have no excuse for my nerves other than “they run through me like my bloody skeleton”.

It was pretty slow going during the day, which was actually a lovely opportunity just to look around. The country the Fitzwilliam covers is almost cry-makingly beautiful, plus it gave me time to recover from Barbra’s bouncing, and cover her in pats and nonsensical praise. I’m not so worried about her launching off, but there are quite a lot of rabbit holes and the idea of something happening to those plucky piebald gams of hers fills me with dread. (Did I mention I worry a lot? Must become more zen in 2018). That said, we popped over a ditch without even thinking about it. Maybe it’s because they go across rather than up. Who knows? 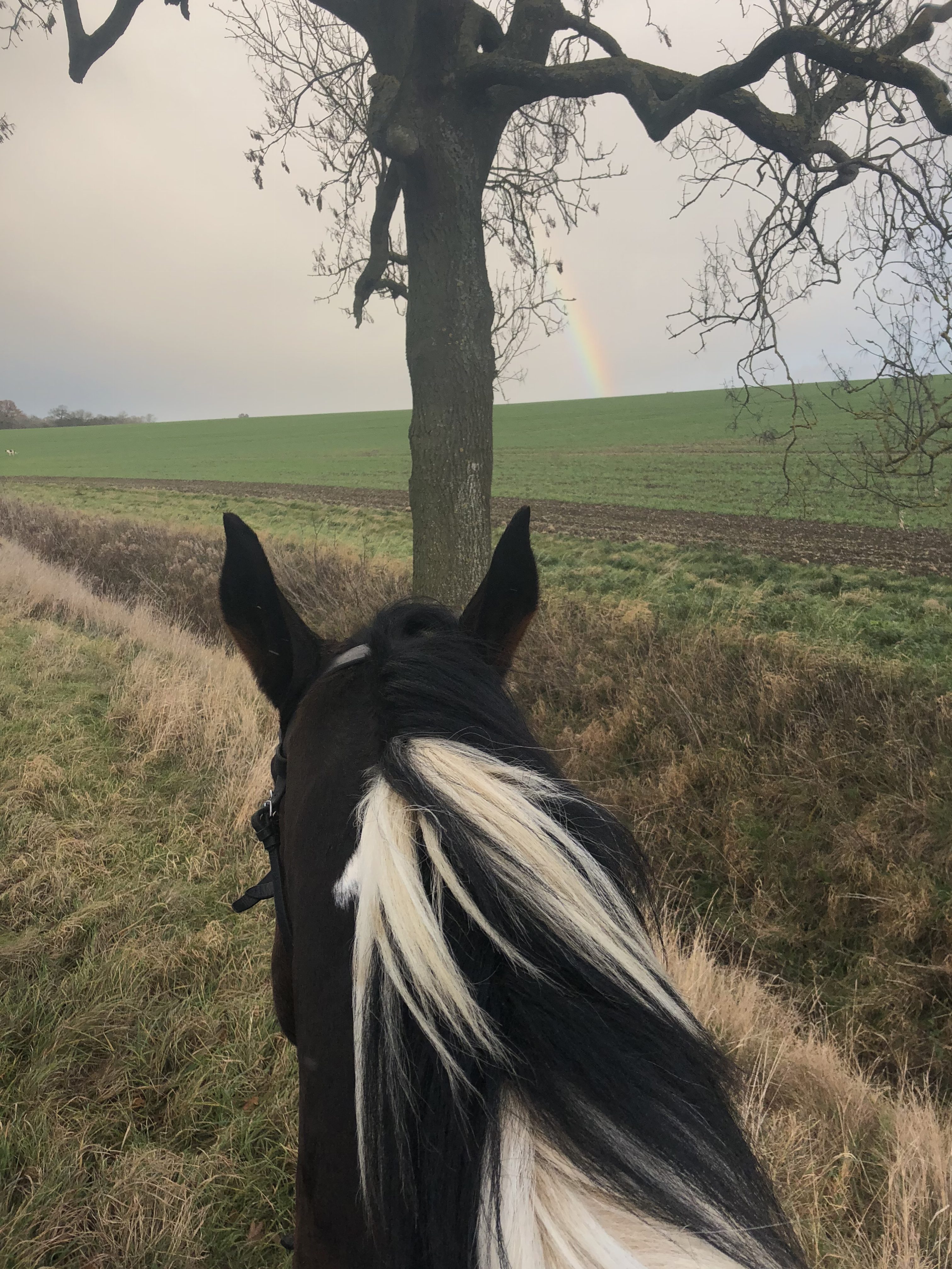 Almost inevitably our macs acted as a talisman, and the only evidence of rain we saw all day was a lovely rainbow, which sat rather picturesquely with a hound at the end of it. The field thinned until it was just me, Fitz Rep, some visitors from the Cottesmore, our Field Master and the Huntsman. Other than the sheer friendliness of the field, this is my absolute favourite thing about visiting the Fitz – those last few minutes when the light falls and everything suddenly becomes silent and magical. Well, they did until I absentmindedly switched off airplane mode on my phone and got a call from my husband telling me the kitchen we were supposed to be having delivered that week had been cancelled. Never turn on your phone out hunting, it’s against the rules, and you’ll never get any good news from it.

The sun set most gloriously as we headed for home, and to celebrate, Barbra took against a quad bike and launched off, approximately two minutes from the yard. I swear this horse could have done another five hours without shrugging, but teatime and a bath called, for her and for me. As ever, what a complete treat to be able to do this from London. 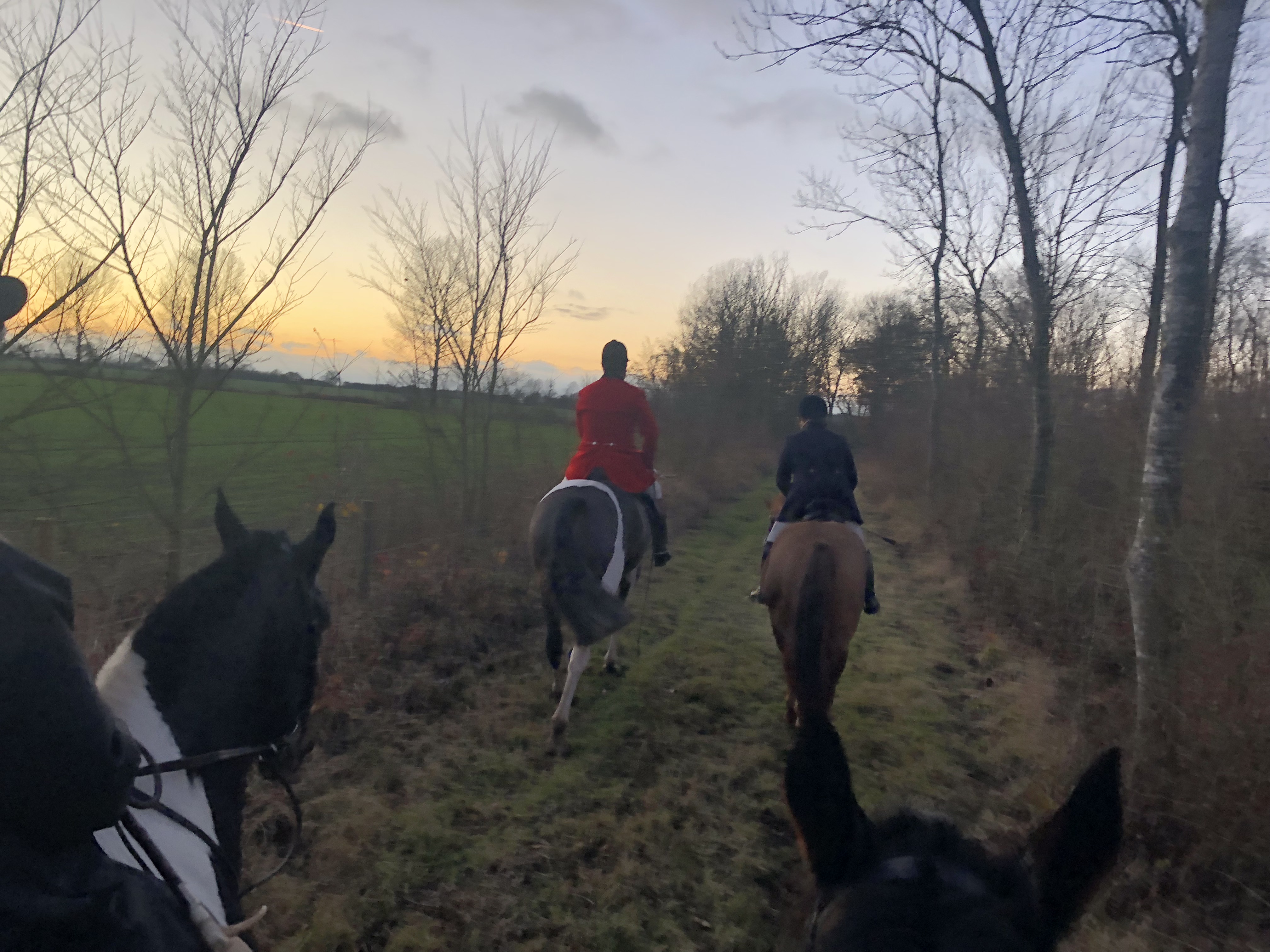 Unless I get a surprise lottery win, that is most likely it for my hunting in 2017, but I got the absolute vicarious delight of seeing a girl I follow on Instagram having her own first day with Plantation Hirelings after seeing my posts about them. I can’t recommend them enough, and if you’re thinking that you might like to have a go, absolutely get in touch – and let me know so that I can live vicariously through you too! 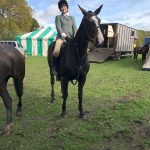 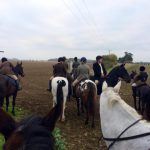 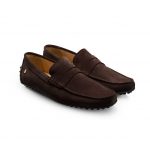 10 Christmas Gifts for Him 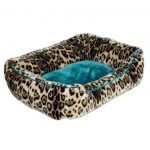 10 Christmas gifts for your faithful friend 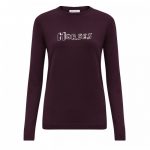 16 Christmas Gifts for the leading ladies in your life 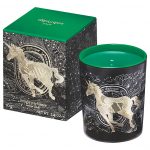 7 Christmas candles to treat your senses