More than 700 horse and rider combinations competed over the course of the three day competition where organisers’ hard work to produce good safe ground in light of the dry spell earned plenty of plaudits.

“The feedback has been incredible. After such a long dry spell we’ve had to put a lot of work in on the ground, in addition to our longer term plan which was put in place after the August horse trials.

“We kept sheep on it during the winter which ensured it was evenly grazed, and then we gave the grass plenty of time to grow so that we had a good coverage. The guys have been aggravating and aerovating the tracks over night and we’ve sand dressed any areas that are uneven.”

Chippenham-based David, 24, was thrilled with his ride on the 17.2hh gelding who he allowed to bowl on cross country for the first time since taking over the ride this year.

“He’s a really big horse, and it’s a bit like riding an oil tanker, but most of the fences at Bicton are in a straight line and the ground was great so I was able to let the handbrake off. He was beautifully produced by Louise Lockwood who my mum Maggie used to teach and we bought him in mid February,” explained David who added that increasing the gelding’s fitness levels has been key to his spring training programme.

“We’ve worked a lot of this, hacking him out around our farm where we have some fantastic hills. I dug out some old books on three day eventing fitness and he goes out for really long rides. I might do a schooling session with him, and then he goes up and down the hills,” said David.

Seventeen-year-old Tom Hawke finished second on Andrew Nicholson’s former ride Mr Cruise Control with the teenager admitting that the 16-year-old has always been awesome cross country, but has struggled with the showjumping phase in the past.

“He’d had a long time off and I really struggled with his showjumping, but he feels completely different this year and I think its because it has taken him a long time to recover from a fall in 2015. I worked for Austin O’Connor this winter and he was a huge help, and I’ve also had lessons with Harriet Nuttall.”

Tom, who was recommended the ride by Nicholson after the decision to downgrade him, plans to tackle CCI2* Young Rider class at Houghton International in May. Libby Seed and Philanderer II were third and Aaron Miller was fourth on Leonardo VIII.

Section sponsor was Rathbone Investment Management whose regional director Sarah Tobey was delighted to see her own On The Brash (Rufus) win the advanced intermediate with Sam Griffiths on board. 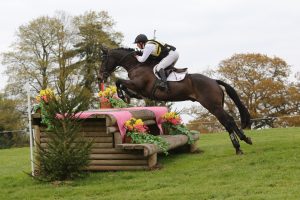 Sam Griffiths On The Brash

Tiverton-based Sarah bought the 11-year-old as a foal from Ireland and after spending his first three years living in her fields, he was sent back to Ireland to be backed and ridden by her step-father Eric Smiley who started competing him before Bicton Arena’s manager Helen West took over.

“Helen brought him up to intermediate level and when she took over running Bicton, Rufus moved to Sam Griffiths’ yard and Sam has successfully competed him since then.  He has completed three CCI ***, running at Blenheim twice and Tattersalls.”

Sam, who also collected a BE100 win on Carphene, said:

“I came here expecting to withdraw my horses after the showjumping, but the going was excellent with a good covering of grass and without any bumps, which meant I could really put my foot down with On The Brash. He was a machine and didn’t put a foot wrong.”

There were a handful of local wins with Amanda Wreford-Brown, a McTimoney Animal Practitioner and Chartered Physiotherapist, from South Brent heading a Wyvern-sponsored BE100 section with her homebred seven-year-old Tristis Rock, named after a landmark on Dartmoor.

Wiltshire’s Tom Grant’s produced faultless cross country and showjumping rounds on Leaping Lord and Argyle Diamond to head his respective novice and BE100 sections and Camilla Read won the BE100 under 18 section with Cloonbarry Flare.

Bristol’s Alexander Whewall headed the open intermediate with Chakiris Star, the intermediate went to Giovanni Ugolotti and Duke of Champion and Sarita and Christopher Perkins’ Simon Porloe headed the BE100 Open with Emily Chapman in the saddle.

Eleanor Hope travelled from Buckinghamshire to win the a novice under 18 section riding Porsch Pride and Gemma Gurvidi was a novice section winner on Elady Liberty D.

Following Sunday’s prize giving, Arthur Stevens was presented with a picture in recognition to the 50 years he has devoted to British Eventing both as an organsier and a volunteer.

In The Start Box, Part 3